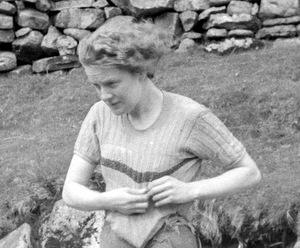 The following is a subset of a collection of glass slides generously donated by David Roberts to the British Caving Library. It is believed that they originally came from his uncle and aunt, Mrs. and Mrs. Gilbert. Kathleen Mabel Gilbert (née Bingham) was the Treasurer and Distribution Officer of the British Speleological Association, while John Clifford Gilbert was the BSA Chairman. They were both active cavers based in Derbyshire, and were involved in the original explorations of Lancaster Hole - indeed, Kath's Way is named after her as it was she that originally identified the strongly draughting blockage. Some three years after Eli Simpson's death in 1962 they moved up to Skye. John died in 1975, and Kathie died in 2004. The slides were donated to BCL by David Roberts in April 2012. An interesting article about Kathie Gilbert, written by Peter and Julie Mohr, appeared in the RRCPC Newsletter Volume 36 Number 3.

The photographs appear to have been taken in the late 1940s and early 1950s. Those in Lancaster Hole and Ease Gill Caverns were taken in the very early days of their exploration, and are interesting in that they shew what the popular passages looked like in the early days, as well as providing an insight into the equipment in use at the time. At least some were taken by Bob Leakey with George Cornes supplying the human element. If anyone can cast further light on any of the locations or people in the photographs, please contact us on the Library website to let us know.

The slides were digitised by John Sellers in 2012, and the highest possible resolution images may be found here. 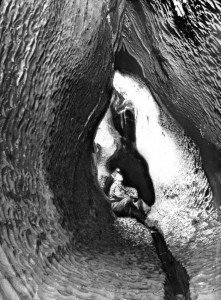