Much of the Giant's Hole entrance series was blasted open in 1967 in an ill-fated attempt to turn it into a show cave - so most modern cavers will never have realised what an epic it was even to reach the top of Garlands; something which is now a standard introductory trip for school kids on an adventure weekend. These images are a good reminder of the pre-1967 days.

On the way in it was necessary first to crawl under The Curtain, then, in order to bypass Sump 1, you had to climb up to squirm through Pillar Crawl and emerge into the steeply sloping Lower Passage. There you had to bale Sump 2 into the Second Backwash Dam and from there into the First Backwash Dam, and once you had done this you couldn't get back up the passage and out of the cave without letting the water out of the dams because there was no airspace. (That's where the photo of Les Salmon was taken, wallowing in what was called the Backwash Sump.) With the water bailed back into the dams it was then possible to dive through the Sump 2 (which was a flat-out crawl), into Basecamp Chamber. (The water gradually flowed back into the Sump 2, which was effectively a static sump, from the pool in Basecamp Chamber and, once it had filled again, you couldn't bail it from downstream in Basecamp Chamber.) From Basecamp Chamber to the top of Garlands Pot the cave hasn't changed much but Garlands used to be 30 feet deep until it was reduced to 15 feet by the rubble from the blasting wheelbarrowed along the passage and tipped over.

There always used to be 2 sledgehammers and two lengths of narrow pipe to enable you to knock the bungs out of the dams on the way out. And you had to be sure to knock out the bungs as you left so the dams didn't fill with the general trickles of water - because if they did, on the way in you couldn't get down to the dam to empty it because the passage was sumped by the water in the dam.

Brian Edey at the Curtain

Les Salmon at the Backwash Sump

Brian Edey near Base Camp Chamber

Brian Edey near Base Camp Chamber 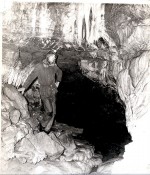 B.K. near the Windpipe