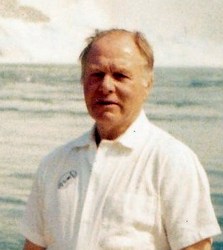 Albert Roberts Wilkinson (1926-1989) was a keen caver in the late 1940s and early 1950s, caving in the Yorkshire Dales with the "16th Middleton Scout and Rover Group" from the Oldham area, in Lancashire. The group included Elizabeth (Betty) Emmens whom he married in 1952. In 2019 their daughter Catherine and son Richard kindly donated an album of caving photographs that originally belonged to their father. These provide an insight into the techniques and equipment in use at the time, as well showing some of the caves before they were as well trafficked as they are today. They were by no means casual cavers - one sequence of photographs shows a descent of Lost Johns' Cave to Lyle Cavern - no mean feat in the days of rope ladders, wet pitches, bicycle lamps, and woolly pullovers. The group were involved in a flooding incident in Lower Long Churn in September 1948, of which there is an interesting account.

We suspect that the photographs were taken in the period from about 1948 to 1952. It is not known with certainty who the photographer was, but it was probably Wilkinson himself as he only appears in two very obviously posed shots, probably taken with delayed shutter release. They are certainly of good quality. The hefty tripod used can be seen in a surface shot.

The photograph album is annotated, primarily with the location and the personnel, but there are also some interesting side notes. On ladders: "This ladder is the first to be made by the club. The rungs are round and fitted into the lay of the rope and bound with cord. This method was abandoned in favour of drilled rungs and knotted rope, as the latter is quicker." 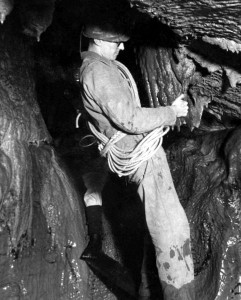 Photographs of Bull Pot of the Witches
7 images (1.3 MB) 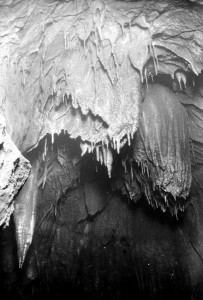 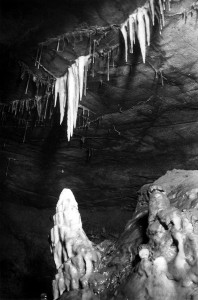 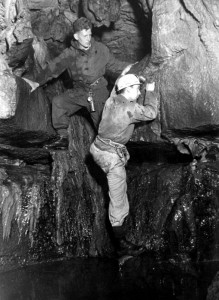